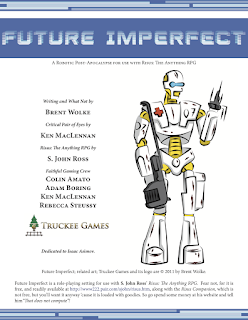 Long after the last human was born, sentient robots attempt to find a way to resurrect humanity and save themselves as they too face extinction in an increasingly dangerous world.


Future Imperfect represented my first real attempt at creating a serious setting with Risus, but the general idea had been floating around in my head for years and I had some initial notes written down for use with Savage Worlds.

Like most, I'm sure, we've all had that notion of an RPG where the characters are all robots. I wanted to do one like that, but I also didn't want it to be merely a gimmick of play. I wanted some substance. The first draft took place on Earth with humanity largely extinct and the droids responsible for finding a cure. It was OK.

Somewhere around this time, I got seriously into yoga, and spiritualism was heavy on my mind. I started thinking about robots having souls and reincarnation. That's when a huge chunk of the 'secret' of the setting fell into place. In writing up the first adventure, that last little 'oomph' struck me when I had an epiphany that the world itself had been reincarnated! I went back and rewrote the setting to place it on a very similar, but not quite, Earth.

As to mechanical bits; in thinking about how to represent 'repairs' rather than 'healing' I came to the conclusion that I would spin one cliche off to represent the structural body of the droid, and the rest to represent programming.

That's pretty much the big picture, and the rest is just details.